Anyone who knows me well (and by now, I’d say that includes you, dear readers of this blog) knows that I am irrevocably in love with these things: my husband, our fur children, my loved ones, seeing as much of this amazing planet as I physically can, the woman I’ve fought to become over the years, and this beautiful life I’ve been blessed to live. I’ve vowed for some time now that the items on that list were going to get the very most I have to offer, and I can honestly say I’m pretty content with how far I’ve come and where I’m going. All too often, especially and sadly in people my own age, I see repetitive settling. So much existing but so little living. So many dead at 25, but not buried until 75. I refused to partake in that. How, might you ask? By treating each day I’m alive as the genuine treasure it is and living it to the very best of my ability.

Tim and I really struggled with Christmas gifts for each other this past year. Not because we’re especially difficult to shop for or because we just had an endless list of materialistic wants, but just the opposite; we were totally and completely happy with everything we have and couldn’t come up with anything that we especially desired or needed, and that’s what made it a bit of a difficult task. New items are always nice; shiny new toys to play with are exciting – in that fleeting moment. I had all I needed – what was I supposed to ask him for? When I couldn’t for the life of me come up with a kitchen appliance our home was lacking or a new pair of shoes my feet simply couldn’t be without, I proposed simply not exchanging gifts between us altogether. It wouldn’t have been a bad thing at all – in fact, many aspects of it were enticing to me. Not having to worry about finding just the “right” item for the man who has just about everything or fiddling with wrapping paper or any of like. But of course, the husband I have simply couldn’t go without gifting anything at all, which is certainly a sweet thought any other time, but at that one was completely frustrating.

And that’s when it hit us both:

I am a collector of memories, not items. I personally prefer the irreplaceable gift of time or a new way to spend my own that will stay with me for a lifetime versus anything purchased in a store. An experience that I walk away from with nothing but having lived it will always mean more to me than something purchased simply to cross my name off their list.

Being reminded of that suddenly opened up the playing field much broader than what he’d been working with previously. And somewhere in the mix, my desire to go skydiving was homed in on. To make matters even better, there was evidently a special going on during the month of December for a package including the tandem skydive itself AND the photos – it was like it was meant to be. Since we’re terrible at keeping secrets from each other and something of this magnitude was too good to possibly keep under wraps too long, I was let in on it from the get go and I could not have been more excited! I was on Cloud 9 (and quite literally would be in just a few short weeks)!!

That fateful Saturday rolled around and I woke up slightly anxious, but so unbearably excited. I was bouncing around the house getting ready and honestly thought I was going to jump right out of my skin. We arrived at the airport promptly for my reservation and signed all of the appropriate paperwork. Reading through some of the waivers seemed to make Tim more than a little nervous, but I got situated and went down to the appropriate area to be harnessed up and given the safety rundown. Once I had all of the gear on and put together, we walked over to the waiting stage to load up onto the plane. This was the point that I started feeling a little more nervous than I originally intended; I was still over the moon and slightly in shock that it was actually happening, but nerves did start to creep up just a little bit by now. This was something I’d always wanted to do, but that doesn’t make it any less intimidating as it’s actually happening. But aren’t the best things in life just on the other side of fear? As our plane arrived, the tango of nerves and excitement within me picked up tempo, but I was completely beaming. The moment I’d waited for so long was here, it was actually happening. I gave Tim one more kiss and hug and from there, I was directed to board.

The plane was small and packed with a good sized group. The door was pulled down and shut as we took off. I slowly watched as our plane picked up speed and the ground became further and further away. The sights from the flight were incredible; we even opened up the door at one point for us to get an uninterrupted view as we passed the ocean. The height from that point was intimidating, and that wasn’t even the highest of it. My anticipation climbed along with the altitude. My instructor adjusted and tightened our harnesses together and I could feel my palms start to sweat. After a few more minutes, the door opened once again and the two solo jumpers closest to it peered over the edge for just a moment before leaning over and falling out swiftly and without warning. I couldn’t believe my eyes – one moment they were there and the next they were gone. The first tandem jump team then made their way over to the door. They, too, disappeared out of it before I could even blink. Next was my turn. 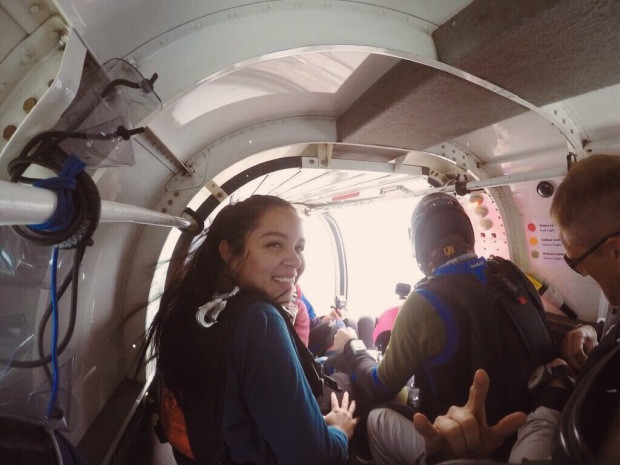 I instinctively reached for anything to hold onto within the plane, but my instructor placed my hands back onto my harness as guided. I’d been told in the safety briefing that when making our exit, I was to scoot across the plane floor on my bottom and dangle my feet over the edge once I got there. It sounded scary, but putting it to practice was even more so. When I placed my legs over the plane’s edge, it took a second to muster up the courage to look down. Before I had the chance to freak out about what I saw and what I was doing, my instructor exited the plane (truthfully, I would’ve struggled with actually getting out of it from the point if I’d had to decide when to do so myself) and we were on our way. 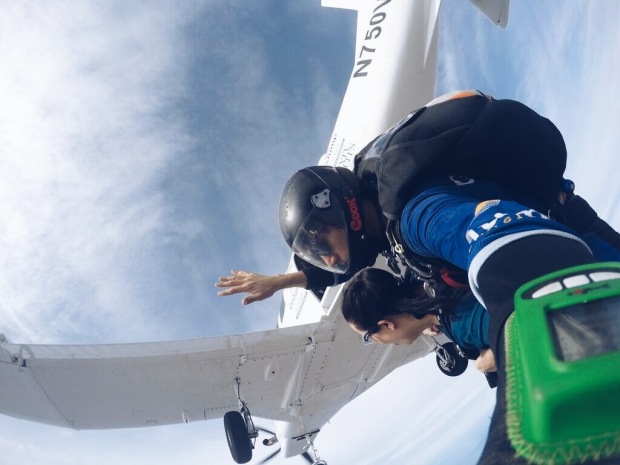 The free fall was unlike anything in this world. I could feel myself screaming, but I could only hear the faintest trace of it. My heart was completely racing, but the smile I had down below somehow took up my whole face now (when I wasn’t screaming, of course) and I honestly thought for a moment it was going to remain there forever. I felt as if I was flying through the air; there are no words to describe the feeling but that will have to do. I felt a tap on my shoulder that gave me the OK to release my hands from the harness and simply fly. After about a minute of falling back down to earth from up in the clouds, my instructor pulled the parachute, sending us from a laid down horizontal position to a seated vertical one with a bit of a bungee sensation. We coasted downward the rest of the way, taking in the grandeur of the view before us – I even saw our neighborhood from way up there. This gliding down portion lasted longer than the initial free fall, but was spectacular in its own right. Slower paced, not as intense, but seriously incredible, too. We swayed back and forth for a bit as I enjoyed the ride, and it was surreal watching the structures and cars that appeared to be ant-sized from 13,000 feet up return to their actual scales.

The landing was much softer than I’d anticipated, as well – all I had to do was lift my knees up and extend my legs outward. The instructor took care of the rest, but it was much smoother than I would have thought after falling at 130 mph. We chatted a bit at the bottom, pinched myself to make sure I hadn’t dreamt it all, and boarded up on a shuttle to take us back to the loading area. When I arrived back to where Tim was waiting, he looked more than relieved to see me. I’m not sure what he was expecting to happen to me up there, but it was strangely sweet how happy he was to see me and how quickly he took me into his arms again.

It took my ears a minute to readjust following the jump, but I was honestly ready to do it all over again as soon as I landed. It was hands down one of the most incredible experiences in all of my years. I wish more than anything that that moment in time could’ve lasted forever; it was as close to heaven as this earthly world will allow me to get in more ways than one. This event had been on my bucket list for just about as long as I’ve had one, and it was so satisfying and life-changing to be able to cross that one off, especially so relatively early in the grand scheme of things. For me, this life is meant to be celebrated and lived to its fullest extent; anything less is simply a personal disservice. Not only has that been what I set out to do, but I feel I’ve done a pretty damn good job of that so far – but it certainly helps having a partner through it all that encourages this in me and helps bring my dreams to life whenever he’s presented with the opportunity. My husband has always been the king of gift giving, but I truly believe he outdid himself this year. I’ll never forget this experience, and I can’t recommend it enough to any and everyone that I possibly can. 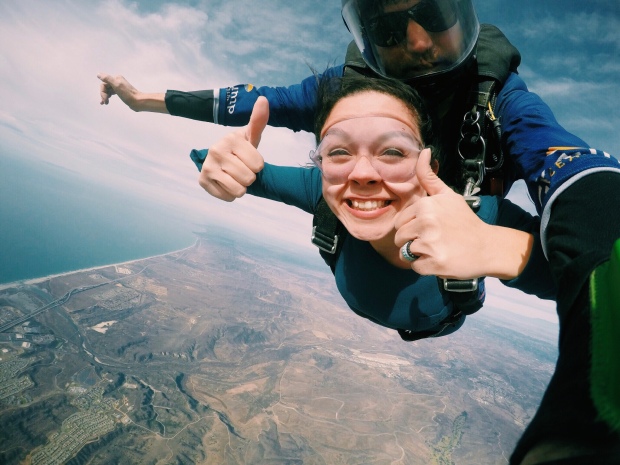 Why hello there, and welcome to Life of Lawry! I'm Jess and I am 25 years old. I am married to my best friend and am a mama to two rambunctious rescue pups. My passions include traveling, writing, iced coffee, and all things Disney. This page is dedicated to all the adventures we encounter in this crazy, beautiful life. Come along for the ride!