Greetings, y’all & happy (Super Bowl) Sunday! Another week has come and gone – thank you, Jesus. I do apologize for being neglectful of this page for the past month; it was a bit of a bumpy to say the very least! It seemed that time absolutely disappeared after New Years Day; before I knew it, I was basking in my 15 minute phone call from Tim on Liberty Sunday. Then I blinked again, and we were abruptly braving a snow storm, on our way to pick up our new Marine! I will say that, reflecting back on it, his time away at boot camp did was here and gone – at least, from my perspective. Even with the especially tough days, those 13 weeks as a whole passed quickly enough for he & I, both. And now that it is said and done, I can’t say I’d go back and change a moment of it for anything. It definitely was a new trial neither of us had any experience with whatsoever, but it molded us both in ways we didn’t know possible (he in a far more obvious way than myself, but I, too, was changed by the end of it), and forced our marriage to grow and change along with it. 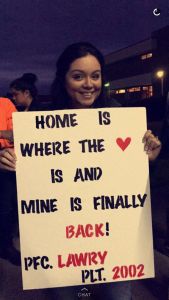 I have had the pleasure of knowing my husband since I was 16-years-old and we have now been in each others’ lives actively for 5 years. (Crazy, isn’t it?!) Over those years, we’d spent a good majority of that time together – in fact, doing most any and everything we could together. We’d taken on long distance in the very beginning of our relationship, but even then, we existed almost exclusively through text messages, sappy, over-the-top Facebook posts or endless Skype calls. We would begin our day in constant communication and end each one the same way, too. So it is no exaggeration when I say I had never done anything even remotely close to what we took on when he left for boot camp. And despite being the person I’ve spent 98% of my formative years with, I’d never before known nerves like those I experienced the closer we got to his graduation date. No one else seemed to understand.

“Nervous? I thought you were excited to see him again?”

“Why would you be anxious? That’s your husband.”

“You’re being , there’s absolutely nothing to worry about!”

Yes, I knew and thoroughly understood all of those things. But there was something about the thought of reuniting with the one person that makes all right with my world after 3 long months apart that made me just a wee bit… Yes, nervous! It wasn’t him as an individual I worried about, of course; his letters did a superb job of letting me know that at the end of this whole thing, he was still the man I married and loved dearly. But there was so much that had changed for us both in that time that I did worry somewhat about how we’d fit back together in multiple aspects of our lives after something like that. We would only be back together for a short time, but there would be some adjusting on both ends that we would eventually have to address. But I decided early on that I wasn’t going to let myself get stressed out about something I wasn’t even sure was going to be an issue yet.

Without elaborating on every finite detail of our reunion, I will say that the moment our eyes met (there was a sea of people between us still) and I had my arms wrapped around him again, it was like nothing else in this universe mattered but us. Every night of crying myself to sleep, not sleeping at all to be up worrying instead, each holiday and milestone he couldn’t be with me for – it was all worth it. The moments I questioned my strength, sanity, and ability to keep it together all disappeared, and gave way to a gratefulness I’d never before experienced. I know it to be a cliché, but in that moment, all I’d experienced back from that fateful day in October to now was totally and completely worthwhile. In fact, I would go through it all, all over for a repeat of that moment again. I can say with absolute certainty that I’d never before experienced a sweeter, more satisfying feeling than I did right then, being back in his arms.

We braved a major snow storm going to and leaving Parris Island, though I would have been totally content getting snowed in anywhere now that I had him. As to be expected, our time back together went by faster than either of us were prepared for or would have liked, but I am more grateful to have gotten those 10 days than I can even begin to put into words. While he was home, our life almost returned to “normal” – somewhat of a variation of a pre-boot camp normal – if only for a brief moment. Even our pups were noticeably happy to have him back; Harlow made her way between us in bed every morning to snuggle with him. All was right in my world and I radiated happiness that was tangible even by others around us. He’d picked up some… Unusual new sayings and mannerisms while he was away, but that was to be expected (to a degree). But at the end of the day, he was still very much my best friend, the man I’d vowed to spend my life with, and my Tim Tim; not exactly the person he was when he left, but the same heart of gold I cherish underneath all of the “new” he’d picked up along the way.

Somehow, giving him up this time was more emotional for us both than seeing him off when he left for boot, despite our time apart being only a fraction of that this go around. While I doubt I’ll ever be especially thrilled or excited to send him away, that’s just a part of the territory we’ve entered into – this is obviously not the first, nor is it anywhere near the last. The ‘see you later’s never seem to get any easier, but I remind myself that each painful goodbye brings me that much closer to our next sweet hello. How lucky am I to get to experience the nervous/excited butterflies and our “first” hugs and kisses back together when we are reunited?

It’s a blessing in disguise to get to fall head over heels in love with Tim over and over again, and learning never to take even the little things most otherwise overlook for granted, even for a moment. This new way of life is going to be an adjustment – to put it mildly – but it’s somehow inexplicably perfect for us and exactly what and where we need to be.

Until next time, friends!

Why hello there, and welcome to Life of Lawry! I'm Jess and I am 25 years old. I am married to my best friend and am a mama to two rambunctious rescue pups. My passions include traveling, writing, iced coffee, and all things Disney. This page is dedicated to all the adventures we encounter in this crazy, beautiful life. Come along for the ride!